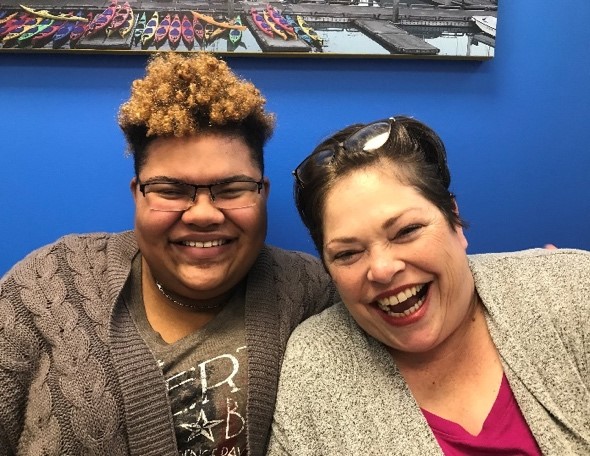 “I was outraged by these people! I did not want the school, the government, involved in my business!”

That was Sandra R.’s first reaction when she learned that her daughter Jinnah, a student at Morton West High School, was starting school-based counseling services with Youth Crossroads.

Then a sophomore, Jinnah began to suffer from severe anxiety attacks. She would walk out of class, get physically ill, and shut down both emotionally and physically.  After going to the school nurse on one of those days, Jinnah was referred to Youth Crossroads’ counseling office at West. Mom was quickly contacted by a YC counselor and was put at ease that any services would be strictly confidential.

The first time Jinnah walked into the YC counseling room at school, she immediately sensed that it was a special place. She would return often to that counseling space over the next two years.

During her junior year at school, Jinnah was involved in some unhealthy relationships that left her feeling used and lonely. She was also struggling with her sexuality and felt the heavy burden of “coming out” to her mom and other important people in her life. She started smoking weed and drinking to help make the pain go away. Graduating from high school was in question.

At this crossroads in her life, the trust and connection Jinnah formed with Jackie, her YC counselor, helped Jinnah begin to take back control of her life. It was also around this time that Jinnah’s mom Sandra, started participating in counseling sessions with Jackie and Jinnah at the school.

Jinnah and her mom began to build a different kind of relationship based on open, calm, and honest conversation rather than the yelling and angry finger-pointing cycle they had previously become trapped in. As Sandra put it,

“Our counselor gave us the tools to communicate honestly with each other, to really listen to each other. I’m so proud of the hard work Jinnah put in to change her life. She learned, as did I, how to cope. Jinnah was blessed with new insights and desire to be the best she could be. YC…(Jackie) helped give me my daughter back!”

Sandra added, “It’s scary to open yourself up. I want to let parents know how important it is to put their own insecurities aside, and get help, for the sake of their family.”

Jinnah went on to graduate from high school. She is working now in a local grocery store and is comfortable meeting and working with the public. Her anxiety attacks are gone. She has new friends she trusts and who help her stay away from unhealthy lifestyles.

“I felt like that counseling space was the safest room in the whole school! I could always stop in and talk, and leave feeling stronger, smarter, better. I was given my life back, given my mom back. I don’t know where I’d be now without YC and the support provided by Jackie!”

Jinnah and her mom Sandra are one example of positive outcomes that Youth Crossroads makes with over 1,200 young people and their families each year. Whether it’s through individual and group counseling, crisis intervention for kids who have runaway or been locked-out of home, through after-school mentoring and support services for local middle school students, or our teen Youth Leadership Program, our goal remains the same – to support youth in reaching their full potential.